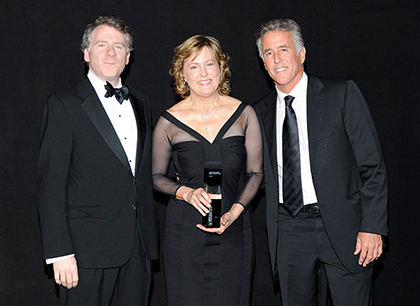 Jenkintown, Pennsylvania (March 18, 2014) – Leslie Voth, President and Chief Executive Officer of Pitcairn, received  the top honor of “Women in Wealth Management” for her individual contributions to the wealth management industry, while Pitcairn received the award for “Best Multi-Family Office (up to and including $4 billion AuM)” at the inaugural Family Wealth Report Awards 2014 held in New York on March 13, 2014.

Voth, a 20-year veteran of Pitcairn, has played a key role in the growth and expansion of the firm’s business model, from the introduction of a 100% open architecture investment platform to the advancement of a profit, growth, and service culture. Commenting on her journey as the first woman to lead the 90-year old family office, Voth said: “I am honored to accept this leadership award on behalf of so many talented women in the wealth management industry. Not only is this a personal achievement, but I am thrilled that the industry has also recognized the innovation and excellent results that Pitcairn has achieved, affirming our dedication to the highest level of client service.”

Showcasing “best of breed” providers in the global private banking, wealth management, and trusted advisor communities, the awards recognize companies, teams, and individuals that the prestigious panel of judges deemed to have “demonstrated innovation and excellence during 2013.” Stephen Harris, ClearView Financial Media’s CEO, and Publisher of Family Wealth Report, noted that the awards truly reflect excellence in wealth management, recognizing the very best operators in the private client industry – with “independence”, “integrity”, and “genuine insight” the watchwords of the judging process.

The Market in Five Charts: January 2023

You've Been Asked to be a Trustee. Now What?

The Market in Five Charts: November 2022

Your Year-End Financial Planning Guide for 2022