The familiar cliché that hindsight is 20/20 seems particularly apt as we step into the year 2020 and look back on the decade of the 2010s. At Pitcairn, we encourage our families to measure results over significant periods because that’s the time frame that really matters for them. A decade seems like a long enough period to warrant meaningful retrospection.

These results are cause for celebration. But did they translate into real gains for real people? For Pitcairn clients, the answer is a resounding yes. The outcome is much less certain for many others.

Positioned for Success: Revisiting Pitcairn’s Principles and Themes for the 2010s

Throughout our history, Pitcairn has consistently pointed to three simple but fundamental principles as the foundation for successful wealth management:

In the early part of the past decade, we supplemented these principles with themes we thought would resonate in the coming years. These five themes were:

These principles and themes intersect with five important lessons that can be learned from critical investor mistakes of the past decade.

Lesson #1: “It’s Not Going to Be Different This Time.”

At the beginning of this decade, many people – both individual investors and professionals – were still reeling from the 2008 financial crisis. Many bought into the mindset that 2008 had changed everything; what worked in the past would not work in the future. They were wrong. This misplaced belief clouded investors’ thinking over the decade and still lingers today.

Personally, I heard from many investors asking for “uncorrelated portfolios.” What they meant was a portfolio without the downside equity risk that beset investors in 2008. Why avoid equities? Because they didn’t believe equity returns would revert to the mean, that recent declines would ultimately be followed by recoveries. They were rejecting a market theory widely accepted since the 1950s. Instead, many succumbed to a misguided push to try new, mostly unproven models.

We never believed everything had changed. We were confident the market principles that had worked for all the decades before 2008 would work for the coming decade and they did. I don’t believe in being non-correlated to high performing asset classes like equities. The better approach is to measure the risk that’s entailed in those high performing investments and structure a portfolio in light of those risks. And that is what we did for Pitcairn clients throughout the 2010s.

Which of our principles and themes would have helped investors avoid this mistake? Focus on the long-term and stay positioned for asset inflation. People would not let themselves believe equities would rise again. They did and those who kept their eyes on the long-term prize were there to collect the gains.

It’s human nature to focus more on bad news than good. That’s the source of the old newspaper adage, if it bleeds it leads. It’s also easy for pundits to offer up a list of risk factors to provoke investor fears. But identifying a risk is not the same as correctly determining how likely it is to occur or what long-term effect it might have, if any. I have vivid memories of industry peers ruminating about nuclear fission and seawater temperatures after Japan’s Fukushima nuclear disaster. They didn’t know any more about it than I did and, in the end, their posturing didn’t matter, because this tragic event had no long-term effect on market performance. Similarly, I find it astonishing that in 2010, people really thought Americans would forever change their consumption habits in response to the 2008 financial crisis – we would never again scurry to buy the latest electronics or newest fashions. That’s how extreme the human tendency is to fixate on what can go wrong. Fast forward a few years and see how consumers carried the US economy in 2019.

When we talk about risk management, we often discuss tail risk – the possibility that some improbable event will upend the markets. We need to remember these events can be good or bad. Prepare for what could go wrong, but also be positioned for what can go right.

Fear and negativity have not served investors well over the last 10 years. Money market assets (Chart A) are still as high as they were immediately following the 2008 crisis. Given the length and magnitude of the current bull market, many more retail investors should have returned to the equity markets. But fear kept investors on the sidelines while US equities rose 13.56% annually. 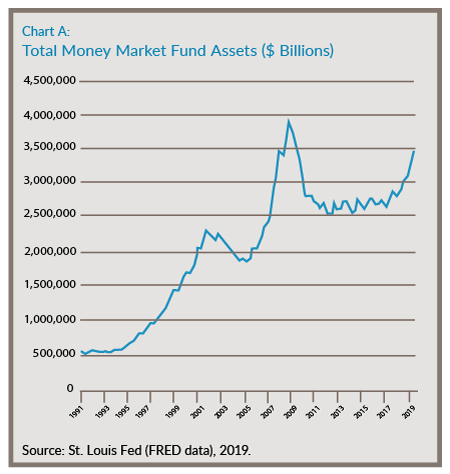 Following our principle to stick with your plan and our theme to stay diverse would have helped investors overcome their own fear and withstand media negativity. Implicit in this principle and theme is the underlying reality that when bad things happen, the prudent move is to stand firm and the riskier choice is to suddenly become tactical and unravel your diversified portfolio.

There is always someone peddling a strategy or a new investment product sure to achieve all your objectives with little or no downside risk. Sometimes I think people hire Pitcairn just so we can help them resist the pixie dust promises often swirling around our industry.

I remember talking to a prospective client in the fall of 2013. He wanted to replace his entire fixed income allocation with MLPs (master limited partnerships). In his mind, true fixed income assets were going nowhere, while MLPs were yielding about 7% with no “apparent” principal risk. Unfortunately, the risk to principal quickly became clear when oil prices went from $100 to $42 per barrel. The idea that these equity-like investments could replace fixed income was magical thinking, a fad to which many investors fell victim.

Today’s fads include certain uses of private equity and direct investments. There are sound uses for these vehicles, but we see some investors assembling a collection of deals, not a portfolio. Others mistakenly believe these are uncorrelated to public equities and less volatile, which leads to overly large allocations. In fact, while public and private markets did very well, we saw many investors become disillusioned with elements of their private portfolios.

Following our principle, be wary of following the herd, and our theme, stay diverse, helps investors resist the lure of unproven fads. However, our theme of keeping up with technology and innovation reminds us not to reflexively dismiss new products and strategies. Our job is to keep up with the changing landscape around the delivery of investment opportunities so that we can take proper advantage of technology and innovation.

Lesson #4: Steady is not stodgy. Diverse is not dull.

People crave excitement, which is great for vacations and football games. Not so much in an investment portfolio. Many investors have come to believe that rapidly moving money from asset to asset in search of the highest return is smarter, more profitable and, let’s be honest, more fun than having a sound, diversified investment plan. Nothing could be further from reality. The probability of successfully executing on a strategic diversified portfolio is so much higher than the ability to execute a timing strategy. The last decade proved that. Chart B shows the 10 best performing asset categories in each of the last 10 years. The lack of discernible pattern gives us a pretty good idea of just how difficult it is to predict the winner or even the runner-up in any given year. But over the course of a full decade, we have seen that investors who place an appropriate amount in a diverse mix of categories do quite well. We are often asked about “our best ideas” and we always answer: our best idea, from a risk and return standpoint, is a diversified portfolio. 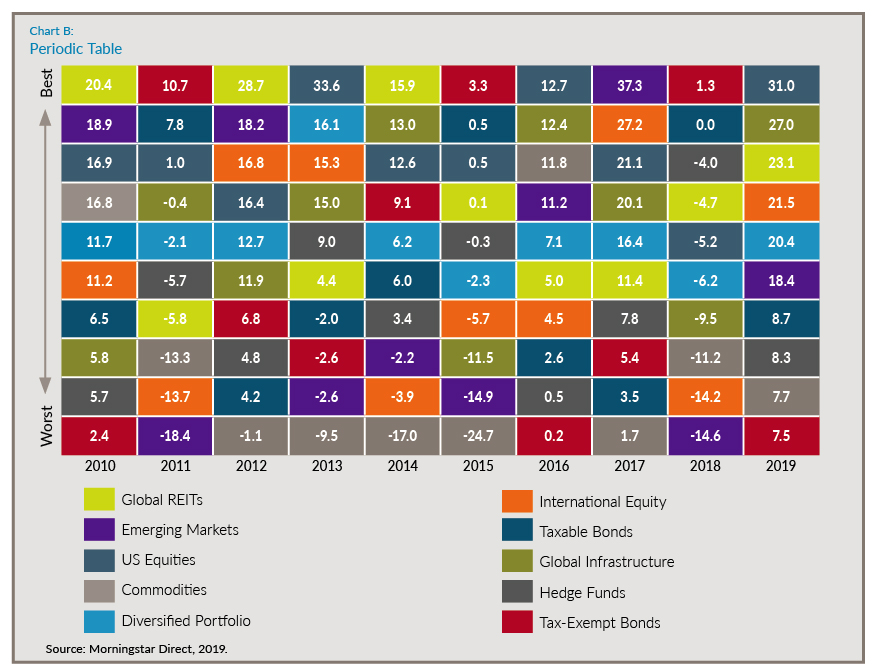 Our principle, stick to your plan, and our theme, stay diverse and be global in your thinking, provide an antidote for the thrills some investors crave. Earning a 20%+ return from a well-balanced, risk-appropriate portfolio in a decade like we just experienced should be excitement enough for anyone. And, one look at the rainbow effect in the asset performance chart should tell you how important it is to own a variety of assets in every single year.

This is a theme that resurfaces at least every two years. From 2010 through 2016, a portion of the US population believed President Obama’s policies would bring the country to ruin. Under President Trump – different people, same qualms. What if the people who feared Obama’s policies had gone to cash in 2012? Or if the people alarmed by Trump dumped their stocks in November of 2016? What an equity windfall they would have missed.

The coming year will be highly politicized. There are multiple candidates vying for the Democratic nomination and there is an impeachment trial in progress. I strongly urge you, don’t mix up your politics and your portfolio. There’s already been apprehension surrounding a possible Warren presidency and recent election polls have markets beginning to price in some probability of a Sanders presidency. Regardless, I think markets and investors can withstand whomever the voters select in any single election. Some proposed policies would likely have short-term negative effects on capital markets, but I am not interested in shorter-term trends because you and all of our clients are very long-term. In a year like 2020, that’s a significant advantage because we can look beyond the noise. Politics is not a reason to take assets to zero or to take any other major step. History has repeatedly shown, notably in this most recent decade, that the bigger risk is overreacting.

This lesson ties directly back to our principle of focusing on the long term and, of course, our theme, don’t let politics overly influence your investments. Investors who embraced this principle and theme were able to ride out what has been an explosive and highly partisan political environment. They may need to do so again in coming years.

One of the greatest advantages I have as an investment professional is that the families Pitcairn serves have very long time horizons. We never feel pressured to make short-sighted moves to shore up quarterly or annual results. We can always do what is best in the long run. Looking back on the past decade, we are pleased with the results achieved by Pitcairn families. We believe that reiterating our fundamental principles and emphasizing core themes throughout the decade has helped our clients to shut out the media’s negativity, the siren song of investment fads, and the noise of partisan politics in order to focus on what really matters – maintaining a diversified portfolio that delivers over time, moving you closer to your overarching goals decade after decade.

The principles, themes, and lessons highlighted in this letter resonated in the 2010s. Whatever the next decade brings, we are confident they will again serve Pitcairn clients well. Because as we all know, it will not be different next time.

Pitcairn is a true family office and leader in helping families navigate the challenges and opportunities created by the interplay of family and financial dynamics. Through Wealth Momentum®, an experience-based family office model, Pitcairn helps families achieve a more effective and complete experience. Since its inception, Pitcairn has partnered with some of the world’s wealthiest families to meet their needs and drive better outcomes – year to year, decade to decade, generation to generation. Today, Pitcairn is recognized as an innovator, guiding families through generational transitions and redefining the industry standard for family offices. The firm is located in Philadelphia, with offices in New York and Washington, DC and a network of resources around the world.

The Market in Five Charts: Assessing the backdrop as we head into 2022

The Market in Five Charts: Has Delta reached its peak in the markets?

The Market in Five Charts: Are we seeing the start of a market correction?

The Market in Five Charts: What's Shaping the Market Narrative